Yazidi girls separated from their families.

The German television station, ARD (Consortium of Public Broadcasters in Germany), produced footage documenting the slave trade being conducted by the Islamic State (ISIS) through a liaison office in the province of Gaziantep (also known as Antep) in Turkey, near the border with Syria.

The German TV channels NDR and SWR declared on their website:

“IS offers women and underage children in a kind of virtual slave market with for-sale photos… The transfer of money, as the reporter discovered, takes place through a liason office in Turkey.”

“For weeks, NDR and SWR accompanied a Yazidi negotiator, who, on behalf of the families, negotiates with the IS for the release of the slaves and their children. … the women are sold in a digital slave market to the highest bidder. 15,000 to 20,000 US dollars are a typical price. Similar sums for ransom are also required to free Yazidis. The money is then transferred via IS-liaison offices and middlemen to the terrorist group.”

“NDR and SWR were present at the liberation of a woman and her three small children, aged between two and four years old, and followed the negotiations. How many Yazidi slaves are still ‘owned’ by IS is unclear. Experts estimate that there still could be hundreds.”

Turkey is a member of NATO.

Click here to view video of Yazidi girls being separated from their families.

The Syrian Defense Forces which are predominantly composed of YPG/YPJ fighters freed Manbij from ISIS rule. Watch video to see the residents of Manbij celebrate. The women fighters in video are members of YPJ. 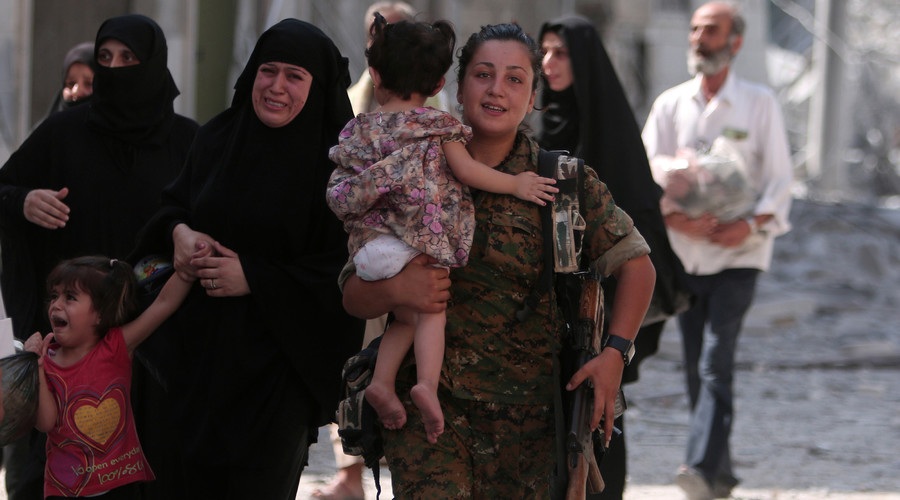 The YPJ (Women’s Protection Units) is the all-female brigade of the YPG, the armed forces of the Syrian region of Kurdistan, known as Rojava. Estimates from various monitors of the number of Kurdish women fighting in Syria run as high as 10,000.

The YPJ have been instrumental in the battle to take back control of Kobani from ISIS. Mayssa Abdo, a 40 year old Kurdish woman from the Afrin region of Aleppo province was the co-leader of of the Kurdish forces in Kobane.

Abdo herself has stated, “a great resistance is taking place in Kobani.” “We can say that the Kobani resistance is in particular a women’s resistance,” she told Kurdish news outlet, The Rojava Report.

She explained that I.S. is relying on “heavy weapons” like tanks and artillery fire, but in the slim streets of Kobani YPG/YPJ fighters have fought back “with ambushes and traps, creative defense tactics and a sacrificial determination.”

Watch documentary produced by 60 Minutes Australia about the YPJ. There is actual battle footage showing YPJ at the frontlines battling ISIS.

All information on this blog entry taken from article published by Telesur.